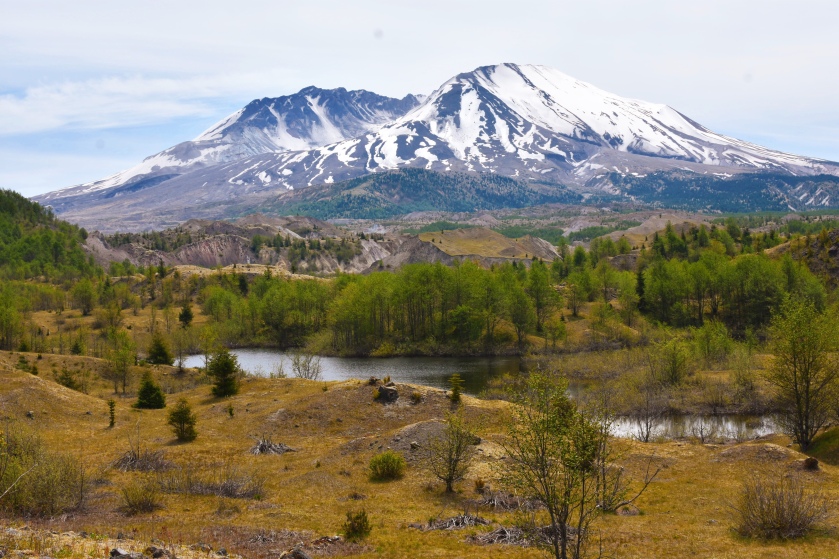 From the Rockies to the Sierras, the Cascades and back, we consistently have an innate desire to seek out mountains. We have made countless loops around the United States, from the interior to the coast, and back again. We haven’t, however had the chance to see Mount Saint Helens on any of our routes, at least not until now. The volcanic mountains in the Cascades paint an impressive picture of our endlessly shaping world. 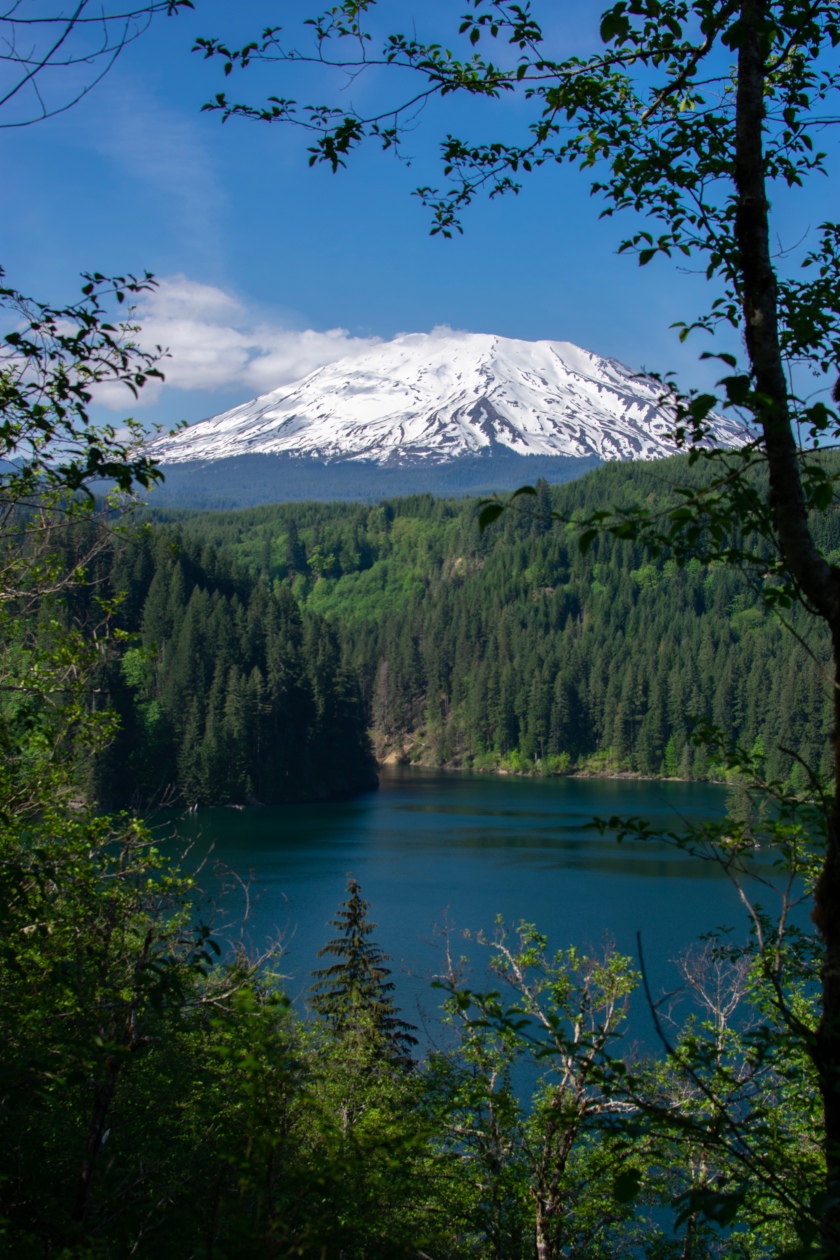 Mount Saint Helens has incredibly impressive geological features. With its relatively recent transformation, the volcanic eruption on May 18th, 1980, a whole new ecosystem has emerged. This active volcano seems to tire none, reshaping landscapes as it sees fit. Tremors felt year round. That explosion blew almost half of its cap off, sending debris, ash and lava miles from the epicenter. New lakes have formed in its upset. A new glacier even has begun to form on the mountain. What we see as a destructive, hellish reckoning force is nothing more than intense regeneration, the constant chaotic beauty of Nature. 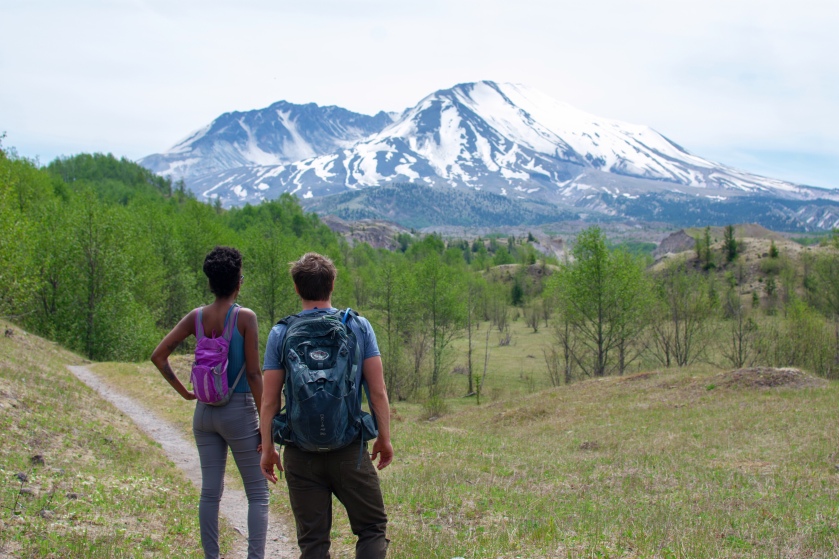 We hiked along the Hummocks. A geological feature nonexistent prior to the 1980 eruption. Large mounds of ash, rock and debris formed a series of endless hills and valleys, tightly closed in upon each other which create a new abundant ecosystem. Trickling streams lie in moss dripping Aspen groves. Frogs belch in the silent afternoon, slivering snakes meander unharmed. Stagnant pools conjure algae, insects, reptilian creatures. 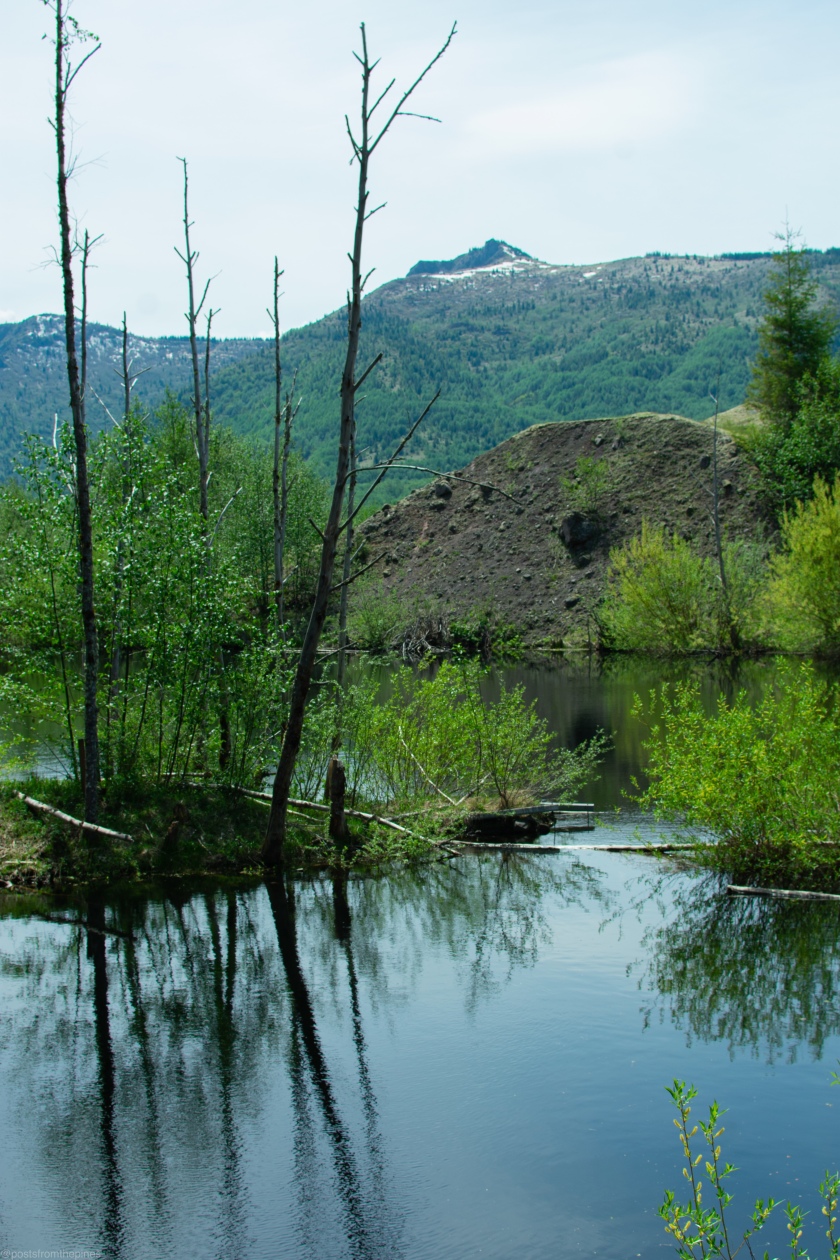 On top of the mounds we see young trees grow through porous lava rock. Fields of green grass and the occasional budding flower. A young oasis with an uncertain future. The ominous yet incredibly breathtaking peak of Mount Saint Helens is a silent reminder to all things living and breathing on this Earth. Nothing shall stay the same or remain as it is. All things must change, grow, or if necessary, explode to become something new. 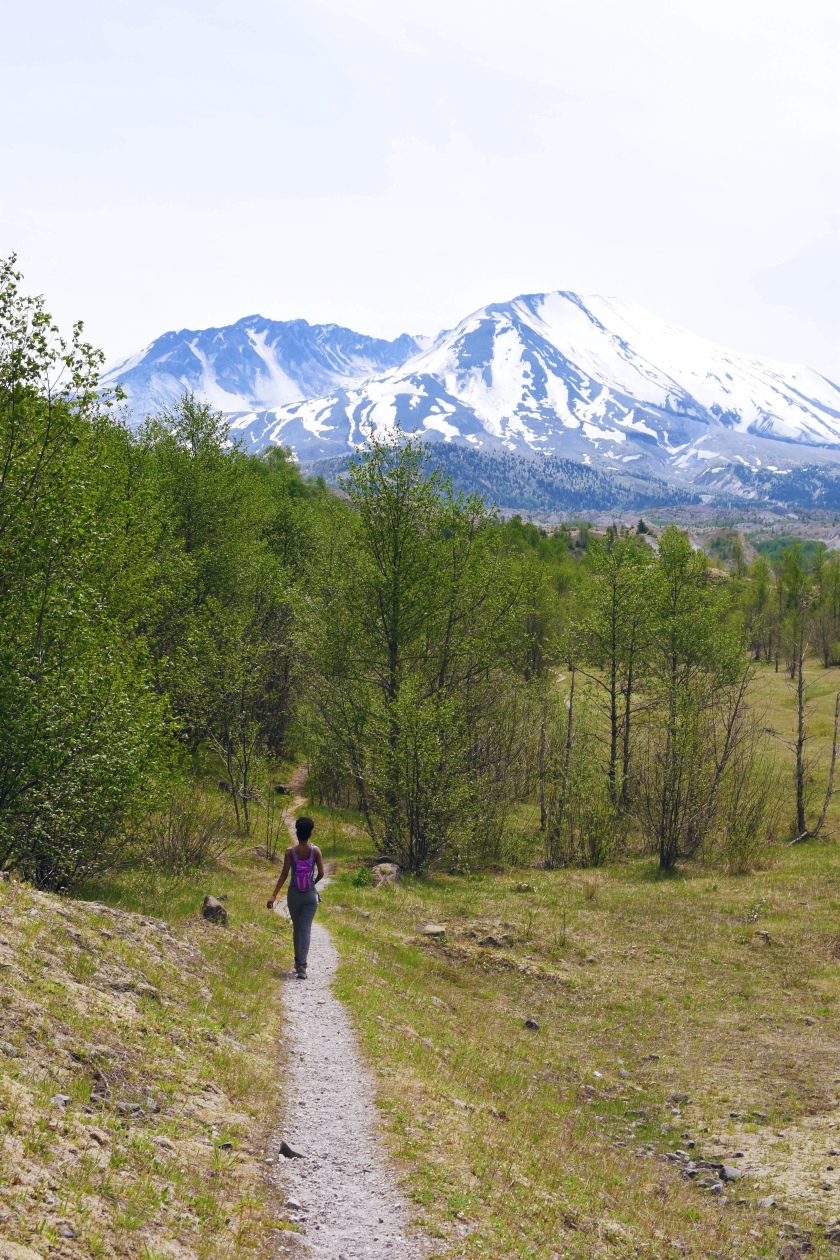 On the south face of Mount Saint Helens lava tubes carve caves deep underground. We left the sun, the majestic snow capped volcanic skyline and made our way down the canyon and around to reach Ape Cave.

We descended into the Earth. With each step the darkness crept upon us like a ghastly, sinister web, spinning imagery into a vast vortex like a black hole. The constant damp chill entered our bones, choking out our internal warmth. High vaulted ceilings, dripping. The lower section unbearably smooth. No structures, no natural showcase of change or growth. No stalagmites or stalactites. An entrance to hell it surely felt, for the birth of this phenomenal cave stems from the ominous volcano itself. 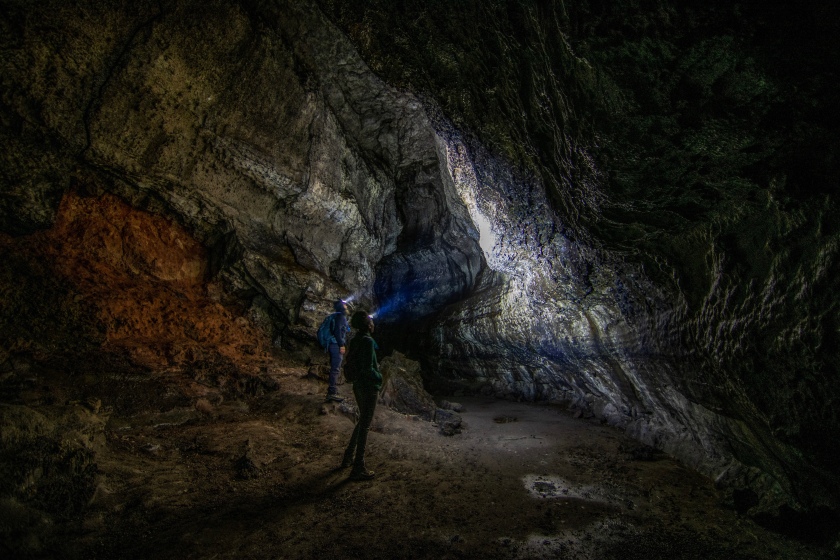 To think lava flowed through here, and could again without any warning made our descent even more spine chilling. Where does the lava tube stop? Could we keep on going forever until we reached the magma core of Mount St. Helens?… 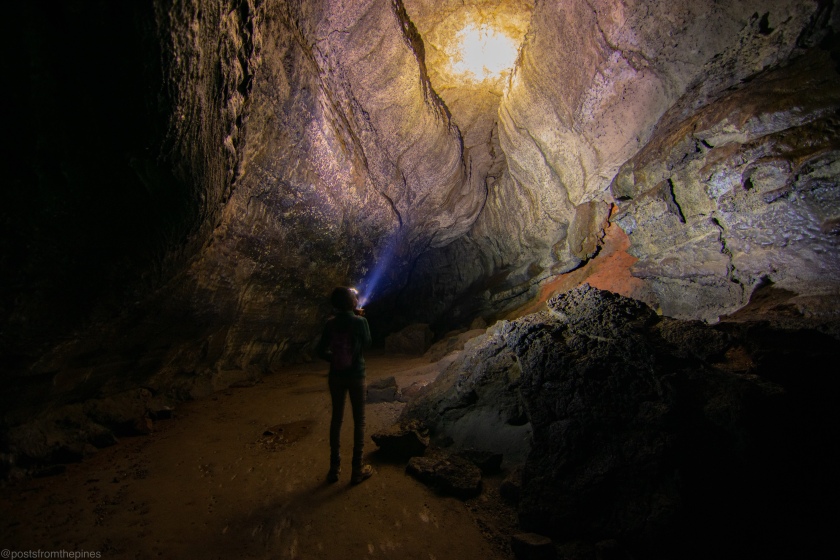 We made our way back to the beginning and then I prepped myself for the upper entrance alone. Tyema would take no part in this section of the cave. Gloves, boots, jackets, food, rope, knives and seven flashlights made me feel comfortable enough to make the two mile journey underground. 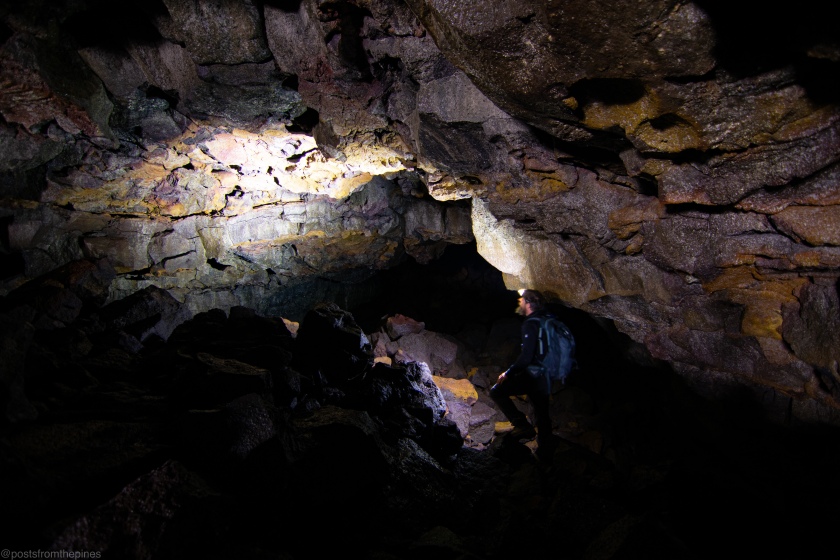 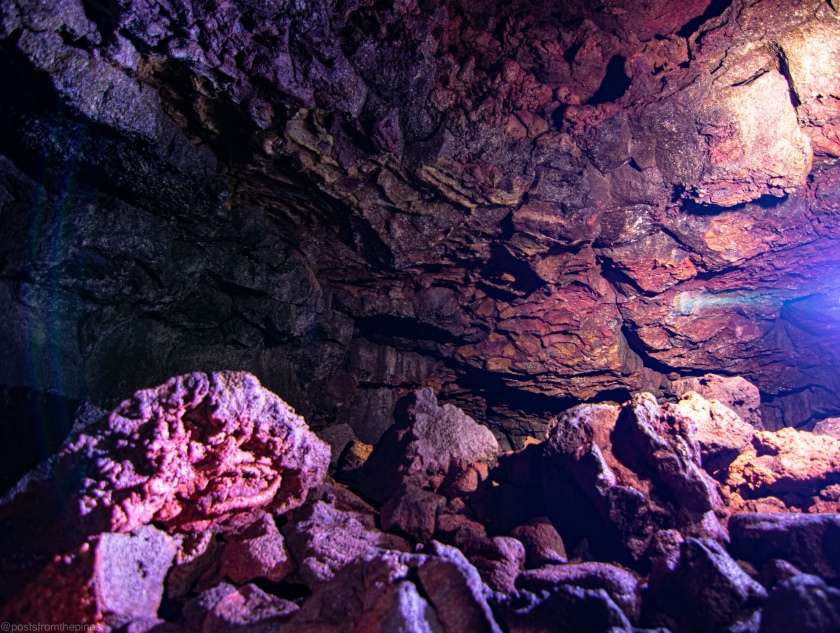 I felt hesitant at first when I reached the first of twenty-seven multi-story house sized boulder fields. No sounds from any direction. No lights other than my own. It seemed as though the boulders reached the ceiling and that there would be no clear route through the debris. Climbing up the boulder field I found myself find myself. Trusting my feet, trusting my mind, trusting the cave. I began running, climbing, jumping from boulder to boulder and through the maze network of cave. If I didn’t reach that clarity, I most likely would have turned around, defeated, ready for the sweet smell of fresh air and abundant natural light.

I passed through the monolithic boulder fields, hopped across small stones on stagnant pools of water, and scaled the eight foot wall to continue the journey through the upper section of the cave. And then, without warning after making a bend in the lava tube, emerged the Skylight in the distance. I felt the wafting breeze enter the cave from above. Small strokes of warmth hit my flesh. Light and life just above me now. Green moss descended into the cave, just to the definitive line of dark and light. Tempting as it looked, this is not the way out. I must continue on until I reach the spelunking end of Ape Cave. 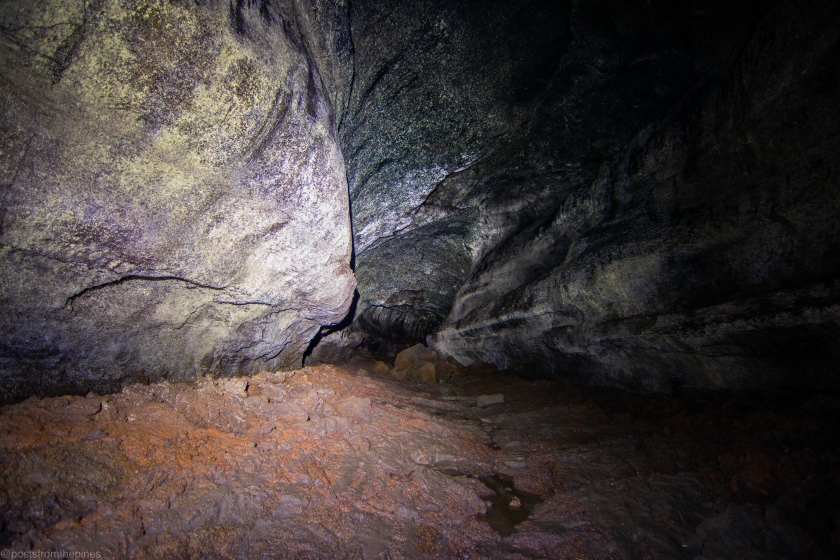 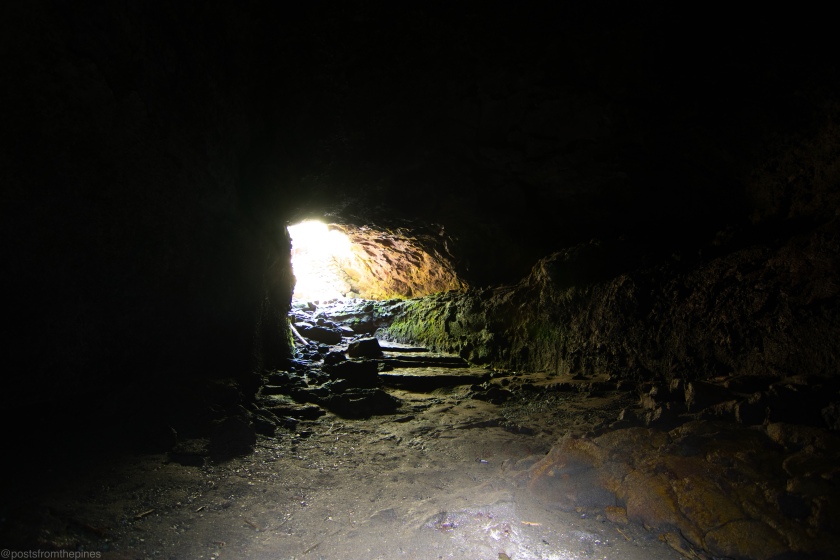 After exiting the cave I was doused in the warmth of the afternoon sun. From the Upper Cave exit to the parking lot was a peaceful mile hike through Douglas Fir, Sitka Spruce and bushy cedars. Pancake lava lie as a base in stream beds. Dispersed lava fields contorted the landscape and sinkholes appeared to the left and right of the trail. Mount St. Helens National Volcanic Monument is an incredibly diverse geological feature with abundant recreational activities. I’m sure we will find our way back here again before too long!